If it ain’t one thing it’s another 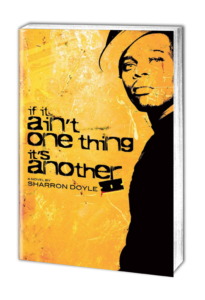 A richly textured story of deceit; If It Ain’t One Thing It’s Another, is the most riveting tale of the decade. Every once in a while an author comes along with dazzling talents. In her debut novel Sharron Doyle broke us off with this sensational tale of vengeance, thirst and hunger. Streetwise, Petie is grinding on the road to infamy. His throne is toppled and his rule is coming to an end. He will not be kingpin, but he’s bent on taking his family, his mistress, best friends and fellow hustler through their most traumatic experiences. On lockdown, Petie is no snitch and does not cooperate with the justice department. After being released Petie’s twisted method of exacting revenge on his enemies will shock and open the eyes of every reader. He comes armed to the nines ready to get rid of those who snitched or betrayed him. His enemies find out that if ain’t one ohing it’s another: this is revenge at all cost. This story brings you on a fast paced journey through the life of hustling where the grit of the streets and greed of the hustle are presented sumptuously in a magnificently convoluted plot. Mixed with zesty scenes, this clever, sexy tale from the streets you will not want to put down until it ends. From the Polo Grounds in Harlem, Sharron Doyle delivers brilliantly with a terrific drama from the inside out. If It Ain’t One Thing It’s Another will be forever etched in your mind.