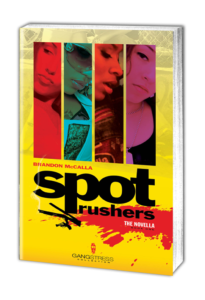 They called themselves the Fatal Four. They are spot rushers. Robbing drug dealers. Using sexual prowess and bewildering charm they have the ability to get next to any drug dealer’s trust. It’s on after the victim’s confidence has been compromised once inside the dealer’s assets and worth are assessed. After finding where the secret stash of jewelry and money are hidden, the group moves in with guns and do dirt the ski mask-way. Sabrina, Rayne, Bernadette and Dora Dean successfully robbed dozens of drug dealers over the years. One night a spot rush went bad and one of the girls is murdered. Their lives were never the same. They are forced to pick up the pieces. It used to be all about the streets and getting ready for another spot rush. Now there was nothing but the uncertainty of living a regular life. They had known nothing but the streets, each surviving girl was left at the crossroads pondering where their life would turn.

Power of the P