Streets Of New York Volume 1 takes readers into the turbulent lives of Promise, Squeeze, Show, and Pooh, four young men from the rough-and-tumble streets of Brook-nam. Big, brash, and bold, the four are modern-day gangstas who take the law into their own hands, helping to rid the ‘hood of derelicts by jacking drug dealers, pimps, and prostitutes. Getting rid of the trash has honed their skills in the urban sports of robbery, jooksing, and jacking, and the gang is good at what they do. But is cleaning up the neighborhood what it’s really all about, or have they begun to enjoy the thrill of the hunt just a little too much? When is enough, enough? A true coming-of-age urbanthology, these funny and exciting stories land the reader deep in Gotham’s gritty underbelly. 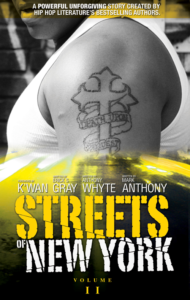 The first installment in this exciting series followed Promise, Squeeze, and Show as they robbed, whored, and fought their way to adulthood on the mean streets of Brooklyn. Now, it’s a year later. Promise is trying to get out of the gangsta life, but the streets have a powerful call. Squeeze and Show are making out like bandits with their hot new nightclub, the Brooklyn Café. Grindin’ in the streets is no longer an option, but trouble still follows the pair like heat on a sunny day. Staying cool with the cops and the city requires flexing a lot of street muscle, and they’ve got too much invested to not use every weapon in their arsenal. Envious of their success, Promise returns to claim what he believes he’s owed, causing a rift within the gang — a rift so wide that it sets off a war, leaving the participants reeling with deadly losses.

In the trilogy’s previous entry, jealousy ignited long-simmering tensions between Promise, Squeeze, and Show, leading to an all-out gang war. Streets Of New York Volume 3 finds the neighborhood reeling from the pain of losing a son and brother to gang violence, yet still, the mayhem continues. The lives of best friends hang in the balance. Regrets abound, but suspicions linger. Bonds are tested and covers blown. Those not from the streets must watch their backs or risk the wrath of street justice. As the novel races to a dramatic close, the fate of an entire family is up in the air. Coauthored by hip-hop lit heavyweights Erick Gray, Mark Anthony, and Anthony Whyte, and with a powerful foreword by Treasure Blue, the “Uncle of Urban Lit,” Streets of New York Volume 3 is a satisfying finale to an action-packed, unforgettable saga.