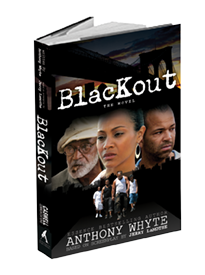 by Anthony Whyte and Jerry Lamothe

It’s August, 2003. All of the Northeast is sweltering, but no place is hotter than Brooklyn, especially the gritty neighborhood known as East Flatbush. Then, in the midst of the heat wave, the unthinkable happens: the power goes out. And stays out. And the longer it’s out, the edgier people get, until finally, edginess gives way to anger. For 48 hours, the community is in chaos. Looters are everywhere. No one is safe. Violence erupts suddenly, randomly, scarring the innocents as well as the agitators, until Flatbush finally explodes into deadly conflict. Based on actual events that occurred during the Northeast Blackout of August 14-15, 2003, this riveting novel tells the little-known story of a neighborhood thrown not only into darkness, but utter mayhem. Illustrated throughout with scenes from the film, Blackout is a heart-stopping, page-turning drama that keeps readers unable to put it down.

If it ain’t one thing it’s another