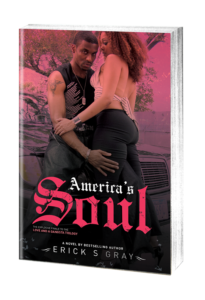 Erick S. Gray’s final instalment to his bestselling, Award-Winning Love and a Gangsta trilogy. America’s Soul, is the most explosive love story of its kind. Erick S. Gray serves up a hot and delightfully sensational stew of gangster life, mixed in with the heart-wrenching effect on the victims who live it and those who love it.

Soul has just finished his 18-month sentence for a parole violation. Still in love with his son’s mother, America, he wants nothing more than for them to become a family and move on from his past. But while Soul was in prison, America’s music career started blowing up and she has become entangled in a rocky relationship with a new man, Kendall. Kendall is determined to keep his woman by his side, and America finds   herself caught in a tug of war between the two men. Soul turns his attention to  battling the street life that landed him in jail — setting up a drug program to rid the community of its tortuous meth problem — but will Soul’s efforts cross his former best friend, the murderous drug kingpin Omega?