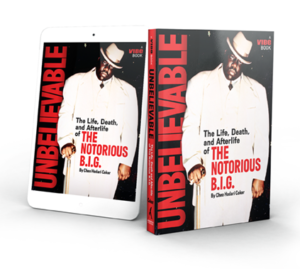 Unbelievable:
The Life, Death, and Afterlife of
The Notorious B.I.G.

In this riveting account of Biggie’s remarkable life, hip hop journalist Cheo Hodari Coker tells the story you’ve never heard about the dramatic, tension-filled world of Biggie, Tupac, Puff Daddy, and Suge Knight, tracing their friendships and feuds from the beginning to the bitter end. Despite the clash of personalities and styles, all four were key players in a volatile and creative era of hip hop, a time when gangsta rap became popular music.

Before he rocketed to fame as Biggie, Christopher Wallace was a young black man growing up in Brooklyn with a loving single mother. An honors student who dropped out of school to sell drugs, Biggie soon discovered that he had a gift for rocking the mike. Coker’s narrative is based on exclusive interviews with Biggie’s family and friends, some of whom have never spoken publicly about Biggie before.

Compellingly written and brilliantly illustrated, with rare color and black-and-white photographs from VIBE’s archives and Biggie’s family, this is an in-depth look at the life and afterlife of an icon whose music is as powerful and prevalent as ever. A virtuoso of flow as well as a master storyteller, Biggie was arguably the greatest rapper of all time. We’ve heard a lot of speculation about Biggie’s death. Now it’s time to remember his life and celebrate his work.